How Sponsors Earn Money In A Real Estate Syndication 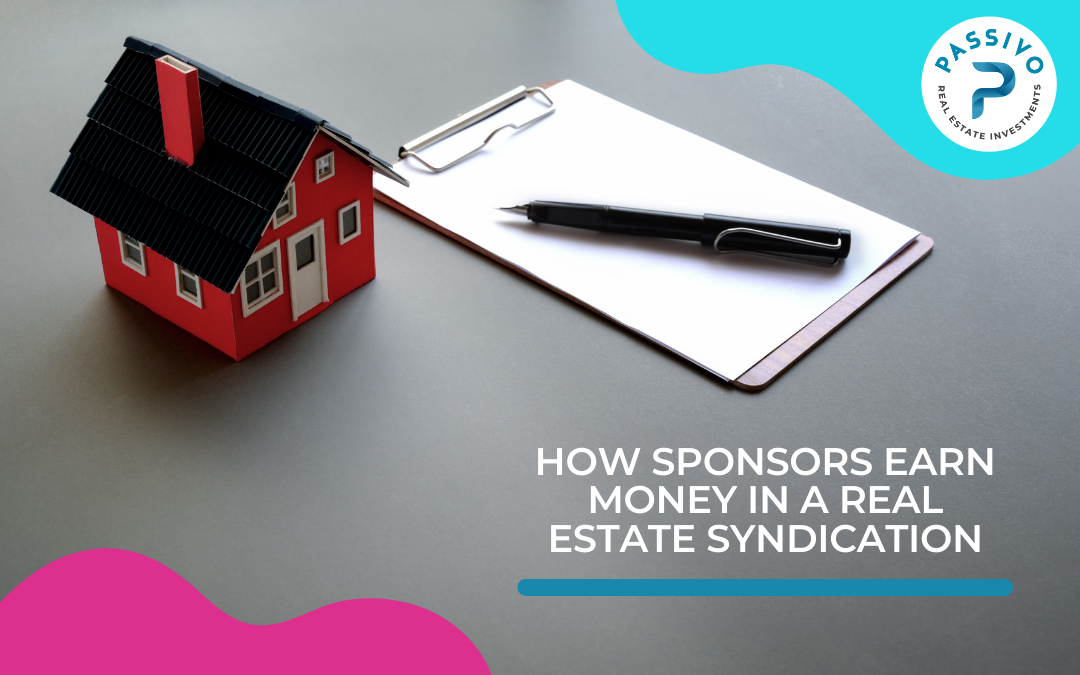 There are many different ways for a General Partner to make money in a syndication.

In this article we’ll break down the two major categories for earning, and then go into detail on some of the processes and percentages involved.

The two main ways a sponsor earns money are:

Since there can be many rare fees that may be charged, we won’t cover every possible example here. But we will hit on the most common ones that you may see. You should also note that a sponsor probably won’t charge all the fees listed here, but will likely charge more than a few.

Also, before we dive in, except in really rare and egregious examples, the way that a General Partner earns money is generally aligned with you (the investor / Limited Partner) also earning money. In the case of profit splits it is obvious, the sponsor wants to execute the deal in a way that generates profit for everyone. But even in terms of fees, you know the old saying of “you get what you pay for”? Well, a high-level sponsor is going to be worth their fees in running a tight ship and making sure they add tons of value to the bottom line of the property.

With that out of the way, let’s get started.

There are three main events that generate distributions:

Nearly all commercial real estate deals will outline the percentage of preferred returns as well as the split owed to the Limited Partners and General Partners on additional profit.

So let’s take a simple example to show you what we mean:

We’ll say the Limited Partners contribute $2M to a deal, with a 7% preferred return and a 50/50 split. And then we’ll say that the distributions are being paid yearly, and at the end of year one the property cash flowed $160K. We now encounter a distribution event based on operations.

You’ll also want to pay attention to how deal returns are projected, so that they are net of fees owed to the General Partners.

And this brings us to the various fees a sponsor may charge.

Expenses arise as a result of the syndication, and may be collected by the sponsor on a monthly, quarterly, or annual basis. There can also be one-time fees as well.

We’ll explore a few of the most common ones:

This is a one-time fee paid to the General Partners at closing. It may also include an “Organization Fee”. You can think of the Acquisition Fee like a consulting cost paid to the GPs for putting the deal together. This fee ranges between 1-5% of the purchase price of the property.

This is an ongoing fee paid to the GPs for implementing the business plan and overseeing the property operations. It is based on a percentage of gross collected revenue or a per unit per year fee. If it’s based on revenue then the standard is between 1-3%. It may also include a Construction Management Fee in cases of major renovations, which would be based on a percentage of the reno budget.

If the property is refinanced during its hold period, then the GPs will likely charge a fee for their work renegotiating with lenders. At the close of a new loan, the GPs may collect 1-3% of the total loan amount. Often this fee is only charged if a specific equity hurdle is reached (eg. returning X% of the LP’s initial equity).

This is a one-time fee paid to the person(s) guaranteeing the loan at closing. The Guaranty Fee can be a flat rate or it can be around 1-5% of the loan amount. GPs can bring in a third party to guarantee the loan, or sign it themselves.

This is another one-time fee that compensates the sponsor for marketing and selling the property. It could be anywhere from 1-3% of the sale price.

Remember, just because these are possible fees does not mean the syndicator will charge all of them. And there may be other, more rare, fees that are not listed here. So you must always thoroughly read through all the deal documents and be sure you understand how expenses and profits will be managed.