The 3 Major Roadblocks To Multifamily Success 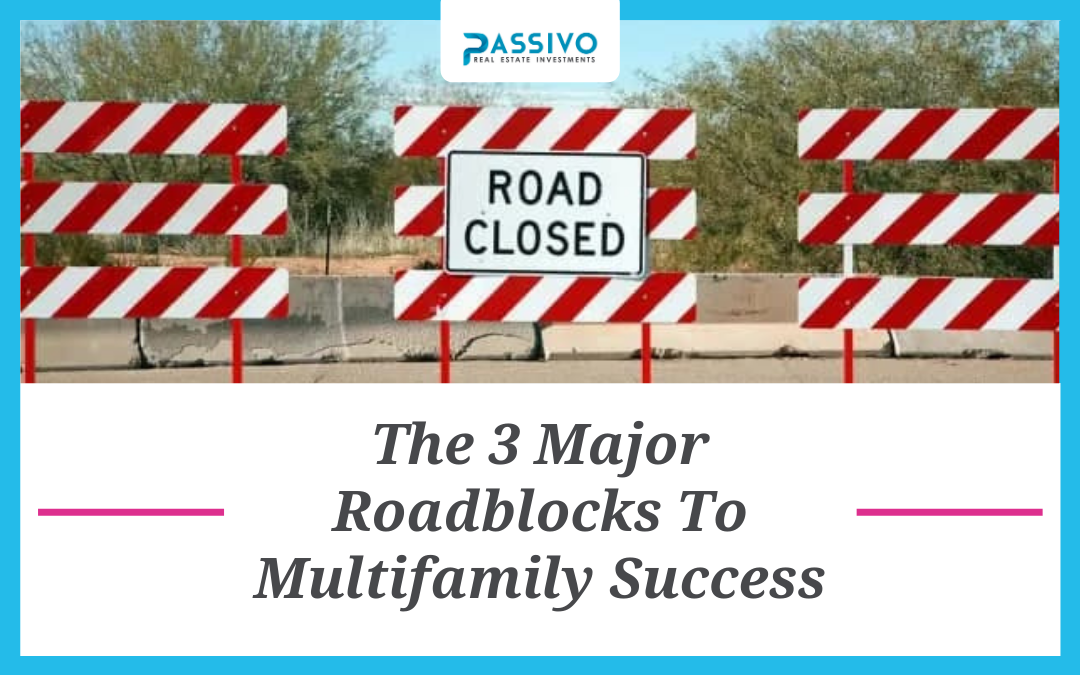 So what’s preventing you from making money with multifamily?

I’m going to tackle some of the most destructive things I’ve seen over the last decade. They pop up again and again. And they absolutely stop folks from making a cent in passive profit.

We’re not talking about bad deals. Or lack of opportunity.

These are self-inflicted mental blocks.

Becoming A Passive Investor Requires A Shift In Thinking

Owning real estate was always a focus in my family.

Back in Venezuela, my grandfather used to say the goal was to live off the rent. Other cultures, other families, they may stress building your own business or investing in the stock market. But for us, real estate always came first.

When we immigrated to America we bought a few rental condos in Miami.

They made money. But there were still always these recurring pains:

I researched alternatives, and eventually found the multifamily sector.

I jumped in first as a passive investor, then as a syndicator. Enjoyed some success, and here we are today.

But as obvious as it seemed to me, I’ve noticed a lot of others were hesitant to get involved. Actually, more than that — they were frozen, they sort of sat on the outside peeking in, but would never act.

Here are the three major things I have seen (especially in the Hispanic community) that hold people back from multifamily.

Most people think they would rather be passive than active. Then when it comes to paying a management fee, they get hung up on that and say “well, we could do it ourselves”.

They fall back into trading time for money. And it’s really hard to scale your time.

True passive income requires efficiency, division of labor, and specialization. And if you want a competent person to help you, they need to get paid properly.

This is an interesting one, because the alternative — owning a single rental property — is not like having liquid cash either.

But I have heard some real pushback at the idea of someone’s money sitting in a multifamily deal for five years.

Now, when you have a long-term vision for your capital, that should change. You avoid the day to day management hassles, and get the cash flow plus capital appreciation of a solid multifamily deal.

If you’re reading this, it probably doesn’t apply to you. But I have to include it because it is definitely one of the most common hurdles.

And I don’t just mean people who don’t know they have the option to invest in commercial real estate.

Even after a person decides they are interested in multifamily investment, they aren’t sure of the right submarkets to target. And they aren’t totally up to date on trends like the increasing demand for workforce housing, etc. They are hazy on the tax benefits.

There is almost too much info out there. So much white noise. And that ultimately leads to a lack of action.

The Common Element Is A Lack Of Trust

These objections — these mental blocks — aren’t saying “I don’t think multifamily is a profitable investment arena”. They are really saying “I don’t believe I have the right team, network, or partner”.

A big part of my early days in commercial real estate was spent meeting sponsors and seeing how they handled themselves over a few deals.

If you can relate to any of the objections above, but you still want to enjoy the benefits of being a passive investor, it’s probably time to start working on your relationships with sponsors.

I’m not saying they’ll always be the perfect fit, or that all your objections will be answered. Maybe they will, maybe they won’t.

But it can’t hurt to find out.

If you’d like to take that first step to establish a sponsor-investor relationship, we should connect.

You can message me on here and we can set up a time to talk.

Or even easier, just join my mailing list and you’ll be privy to how I run my current syndications, what my values are, and if I would be the right fit to help grow your wealth.